I haven't posted on this shit in forever but I wanted to post my new tattoo as much on the internet as possible.

I don't think anyone reads this anyway so it's mostly just to track progress here instead of on my real blog.

Strange, I wanted to update this journal because of something that happened yesterday, and turns out that it's been exactly one year since I last updated it.


So the guy in the last post was my boyfriend for almost 2 years. We broke up in December of last year and we were living together, so I had to find a new place to live. Before I moved, we spent Christmas morning together, exchanged gifts, and then went off to do our own thing.

It's been hard since, because I moved in with a friend and have been sleeping on her couch. Now almost 6 months later (really not even 5 yet) I am still here because I've been working on moving to a new city. It's finally happening, so I need to now sell all my stuff.

I finally got my stuff from his place 2 days ago, and yesterday I was going through some of it. I found a little box that had some sentimental items, like a Mickey Mouse doll he got me when he went to Disneyland and I couldn't go, and a picture of us ... and then I found a little trinket wrapped in plastic. It was a keychain that held the Triforce symbol from the Legend of Zelda, by far my favorite video game and really the only video game I ever really play.

I thought to myself, that's not mine ... and I tried to make out the chicken scratch that was etched onto the plastic with a permanent marker. It said, "forgot to give this to you on x-mas".

This all unfolded in front of the girl I am staying with, and she was there as I slowly read it out loud figuring out what it said. Once I got the words out of my mouth, I looked up at her and she was looking at me wide eyed. Immediately she said, "Please don't cry," but it was too late. My eyes were obviously red and slowly getting more and more damp. I pulled it together, as I was about to go on a run before all this, and I put everything back in the box, chugged some water, and ran out the door in my effortless stride.

During the run, which is my time to lose myself and clear my head, the Triforce keychain kept reappearing in my mind and almost made me lose it and need to stop running.

I held out. Didn't stop running. Didn't every shed an actual tear that would roll down my cheek, but it was hard. A day hasn't yet to go by when I don't think about him.

Back in March, I went to San Juan, Puerto Rico. Got to see my family, see a lot of the island which was remarkable, and also went on a 7 day Southern Caribbean gay cruise.

There was lots of partying aboard, but also got to visit the beautiful islands of Grenada, Barbados, Dominica (where 2 men on the ship got arrested and made headlines for having sex on their balcony, in Dominica where homosexuality is illegal), and St. Barths.

Photos!... extremely out of order photo. Who cares? PHOTOS!

At my grandparent's home in Barranquitas, PR.

Some giant palm branch in Dominica. I am holding a bottle of extremely delicious banana soda. Where can I get that in the US??

At a waterfall in a pool up in the mountains of Dominica. 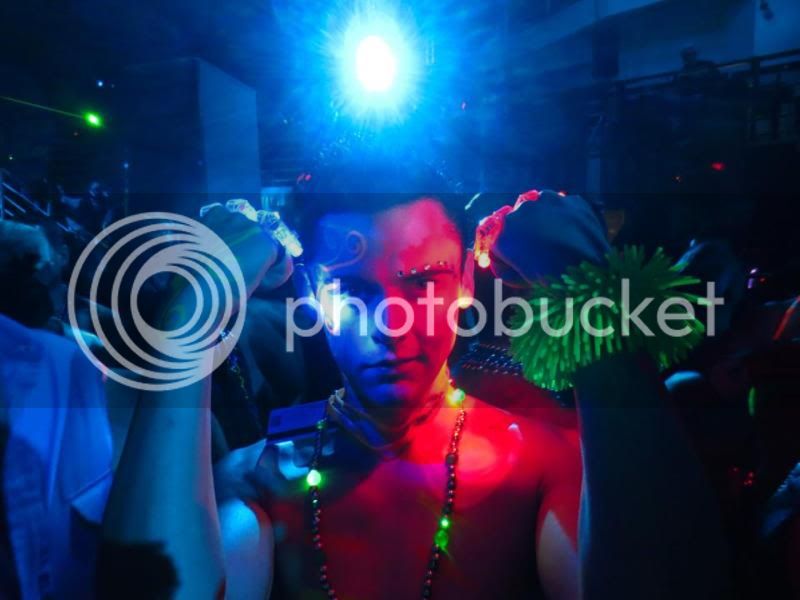 Getting set and ready for some tribal night. I spent more time on my costume than time spent at the party.

Dog Tag T-Dance (first party, so I am still pretty pale at this point)

This scary fuckin' jeep. I thought we were going to die when we rode up higher into the mountains in Barranquitas.

Snorkeling in Barbados. We got to pet and feed sea turtles!!

Swimming in either Barbados or St. Barths. I tried this out a lot.

September I went to Europe.

Look at my pictures.

We went to die Residenz in Munich.

Checked out the Berlin Wall

Climbed buildings made out of WWII ruins in the East German city of Dresden.

Saw some gorgeous architecture in Prague.

Hung around with the bones of 40,000 people in the Czech Republic, ornately decorating an otherwise lugubrious ossuary.

Hopped around on trains

Pissed off some Spanish Horses in Austria.

There were ornate palaces in Vienna.

Which left me contemplating peeing in one of Venice's canals (which I totally did, later that night)

And before flying home we made sure not to leave Europe without checking out a castle straight from a fairy tale.

Well it's been a while since I've updated. Do you know why? Because nothing big or exciting is going on! Well, I guess by that I mean there's been no major drama that I need to kind of keep secret, which I guess is good. I usually only write in here when things aren't going right, or people, who read my other journal and have boyfriends who read my other journal, decide it'd be fun to fool around with my anyway and I just HAVE to report it. Nothing like that's going on...

All quiet on the western front. Hm.. not much on the north, south, or eastern fronts either. It's just been all work, little play, and no play play.

Hey, I can talk about Jake. I like Jake. Jake and I had a little bit of SOMETHING going on back in like May/June or theresabouts. But you see, back then I was 18 and Jake was 15. We only ever made out, but...

He moved to Utah. I went to Alaska. I came back from Alaska. He's moving back from Utah. When I saw him again a whole rush of insatiated feelings flooded my body. That's when Eli jumped all over him. Eli, the guy who's "engaged" yet sleeps with everyone he can anyway. I like Eli. He's a cool, fun, pretty guy, but he's just kinda trashy. And it's not fair for him to get all the boys when he already has one waiting for him at home. It's a lose-lose-lose-lose-lose situation all around.

So he had Jake. Later that party event scene day thing, he was all over this guy named Josh. I had no feelings for Josh since I thought he was straight anyway, but he was all over Josh. Maybe I could get closer to Jake at this intimate house party we were at? No. Eli's all over both of them.

Next week, Eli and Jake are barely even talking to each other. Wonder what the deal is there. Then Jake's all over the Josh guy on the ride home.

I'm 19. Jake's still 15. Maybe it's for the best that I don't get involved as one of these statutory rapists. But Jake is so friggen... well, he's not gorgeously stereotypically manly or anything, but he's not 15. He's 6 foot something, strong features, deep, raspy voice. My favorite thing about him is his voice... I'm not like REALLY REALLY after him or anything. I just don't like being left out. Plus I'm just pretty lonely. I haven't dated anyone in over a year and I live by myself. It's kind of depressing.

There he is
That's his name again
That everyone's mentioning
And I can't seem to take it
No I can't stand to hear it.

Out of there as quick as could be
Not once looking back to see where you should be
I'm out of time. I'm out of luck
That's just how it has to be, I guess.

There he is
That's his name again
Running through my brain
And I can't seem to take it
No I can't stand to hear it.

You're everyone's friend
You're on everyone's better side
and I'll admit still my mind.
I fought my way out
But you always make headlines.
Did you forget who I am
Or did I drive you too mad?
Could I be a statistic to you?

There is he
That's his name again
Coursing through my veins
And I can't seem to take it
No I can't stand to hear it.

What I took, you gave me.
What I broke, you broke in for me.
The damage is done
We had our fun
But was it really worth it?
I can't say I enjoyed it.

Here you are
What's your name again?
Is it worth repeating?
You don't seem to get it
Listen to me so you can hear it.

There you go
Stepping out again
Facing against the wind
And I can't seem to take it
Living life from what you've made it.

Please tell me if I smile too much
I know your chores and I know you don't like them done,
so that's why I'm leaving.
Remind me of the last time I laughed.
When was it last genuine.
When was I not appeasing you, or using you?
It got me out of here, yet look at where I am.
Gratify me instantaneously, then send me home.
You thought you were the one for me, now look at us.
Anchoring each other in a deep sea of fooling ourselves,
hitting the bottom with such a force.
I got there first and still you came.
You're too late. I'm resurfacing.
Now comes the time when I laugh enough.
Here comes a smile. Look how happy I am.

Well Jeff's alive. I don't know whose to say for me if that's a good thing or a bad thing. I called him expecting to request a phone call from him explaining what his intentions are towards me and why his actions are as they are, or were as they were. He picked up, though, to my surprise. Then I talked to him and very vaguely explained I was kind of wondering what was going on for the past couple days but his answer was odd... he said his mind was still on that $8 he won. Yeah.
He said we can hang out tomorrow which I guess I can be excited for, but I plan on explaining to him what I've been thinking the past few days when he's failed to return my calls, but leading me on to think this thing was going somewhere - in much less overdramatic terms than my mind has led me to show myself, of course.
Another thing... he asked me to remind him what my phone number was. Did he not put it in his phone before and remembered, or did he take me out of his phone?

My thoughts on the thing wholly are:
The guy's 18. He's far too young to be doing any malevolent screwing over/leading people on thing. You may disagree, but trust me. I know this guy.
The guy's 18. Maybe he's... not matured in the way that you pick up on when someone cares, and that you shouldn't leave people hanging as he has, or maybe to realize when he is leaving people hanging.

The guy's 18. My age. Younger than I am. Aside from what's been going on these past 48 hours, he's so right for me. We click so well. Wasting something so special to me would have to be on the top of my worries.

I've thought it over some, and what if I don't really bring it up? I can play dumb both to him and myself. Riding a rollercoaster is much funner, after all, if you just let it take you wherever it may end up instead of checking for an inspection after every inversion, am I right?
Collapse